I used to be one of them. One of the few remaining individuals completely resistant to the assimilation of cell phones into our daily brains. I would chant towards the sky on sunny days, praying for the downfall of these soul-sucking, sickening devil machines. And all my friends hated me. They were all like: Where can I get hold of you? And I was all like: You wanna hold me, baby?

I was not allowed to be a hermit, however, oh no. It was people all over the place just dying for a chance to call me their ‘friend’. And as their ‘friend’ I was somehow obliged to ‘keep in touch’. To my big disappointment I soon discovered that this touch-keeping had nothing to do with actual touching at all, which was a bit frustrating since I was a frustrated guy at the time. The 14th of June 2004, a day I was particularly hung over and had some cash to spend, I went out and bought my first cellphone: The Siemens MC60.

It lasted (actually it still "lasts") until fall 2007 when it had serious trouble remembering numbers. This is the first time in all of my computer (and calculator) experience that I have seen a computer that actually forgets numbers in an equation. I would need a new one, but where to begin? I didn’t know twat. I asked around and found out about Amobil.no – a brilliant Norwegian website for phone reviews, regardless of your level of experience. I spent the next two-three weeks making myself familiar with the technology and I boiled it down to a Shakespearian to be or not to be: Quick’n Easy or Everything Included? I ended up with this little baby: 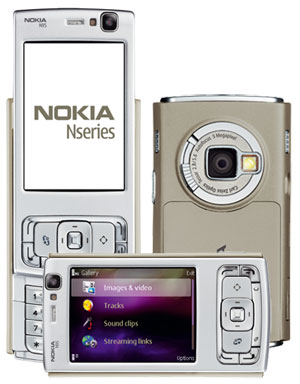 I must admit I was in favour of the Nokia brand from the get-go thanks to Maddox’s excellent article The iPhone is a piece of shit, and so is your face where he compares the iPhone to his Nokia E70.

So far it’s been great. For a business phone it’s not too big for my pocket, not too heavy, and not too sophisticated to use when drunk. It can take a little beating too, and you don’t need a friggin’ stylus: «it allows you to do things like dial a phone number without staring at your screen like a shit-chucking ape. In fact, every other cellphone ever made has this technology, sometimes called "buttons".» (Maddox) The reason why I went for this was the 3-in-1 combo:

Some adjustments I’ve made:

And if you want to, you can install the Accelerometer and this app (both to the phone memory) and use your N95 as a light saber. Since last year I’ve been without a computer, and it’s no exaggeration to say that I’ve been reading websites for hours using the N95 without getting headaches or eye problems. My neck hurts a bit, though. The new music player is also a lot better with the podcasts integrated so you don’t have to go look for them elsewhere. You can also quit the podcast, say in class, and when you open it again it will resume where you left it. This is one of the obvious things that many players get so wrong.

The 2GB memory card limitation is a bit annoying as album after album start filling up space while you don’t want to delete/transfer your images yet. If you’re in the market now, buy the 8GB version. Of course you’ll have to expect to use some hard money on this. I’m chained to Norway’s greatest slave own– I mean, telephone company for at least a year now. Doesn’t really matter to me however, because you can’t put a price tag on love. Amen.