I’ve carefully selected and uploaded 94 pictures from our Barcelona visit in April to Flickr. It was a really wonderful and much-needed vacation from the cold and grey pre-spring atmosphere of dread we were suffering from in Oslo at the time. Let me just say that Barcelona is beautiful and that it even rivals Rome as a favourite destination of ours. Here follows a recap of our days in this brilliant city, day by day..

Sunday: Got up at 3:30 a.m. or the equivalent in Oslo, to arrive in BCN at the middle of the day. By the time we got in to the city the heat was sweltering, so when we got our room at Hotel Chronos we caught up on some sleep and changed into more suitable clothes. Incidentally, this Sunday was also my birthday, so Lady C got the receptionist to cool down a bottle of champagne we’d brought with us. Then we headed out.

We walked through Gotico to Gloria, had a fantastically horrific and tasteless meal at one of the shabby places next to the cathedral, and made our woozy way down to Port Vell. Despite the terrible first meal, we were quickly charmed by the brilliant atmosphere, smiling people and impressive street performers. When we eventually moved on towards the fully erect Columbus monument in the distance, we also got to witness the spectacle of 4-5 urban police officers chasing down and eventually catching a pickpocket! Everyone applauded:)

We had some afternoon ice cream at Gracia, slept a little more, and later had dinner in a restaurant called 1932 in Gotico. This place served quite a few tourists at the time, but the service was good and the food even better!

Monday: This was our first of a few happy lazy days in this city of sun. I’d archived the brilliant BCN FAQ from the subreddit of /r/Barcelona on my phone, and everyone suggested we go see Parc del Laberint d’Horta. We bought a couple of baguettes at our local bakery and some ham, cheese and soft drinks at the hypermarket before hitting the subway. The park is beautiful, it is not a tourist trap and you get some peace and quiet in the heat. Eventually, having walked around the maze and the park itself, we found a nice spot to have lunch.

That evening we were supposed to eat at Catalana but since we were hungry the 50+ minute wait to be seated got the better of us. We ended up at Josephine somewhere in Eixample, nearer to our Hotel. I was not impressed, but suspect we were “hurried along” because we were foreigners. (We were dressed nicely though.)

Tuesday: This is the brilliant view from our Hotel room balcony: 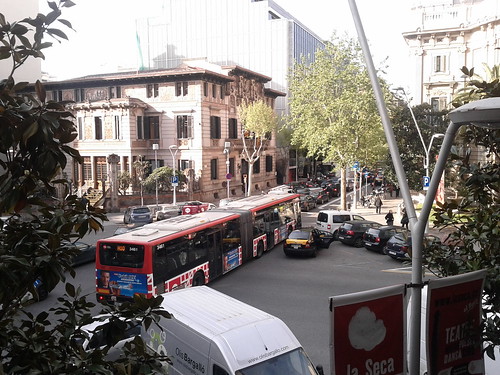 And I’m not being sarcastic. It was really fun to watch the local traffic flow, since it is so different than Norwegian traffic, and I observed enough of the common practices to be fairly confident I would totally suck in BCN traffic:) An important thing to notice in this picture, is that our balcony is on the side of the building, but facing a “diamond” in the intersection creating this social and light, open space. Instead of having each block make a rectangle with a narrow intersaction, as in most cities, the Art Nouveau thinking in Eixample shows how the small things can create living, breathing space which completely changes the experience of pedestrians, not to mention the social patterns, with more road-facing cafés made possible.

With the success of the Parc del Laberint fresh in our recollection, Lady C suggested we head off to another park to rekindle the tranquility of the day before, which we did. Here are some children playing on the parade walk leading up to the triumphal arch; finally arriving at the Parc de la Cituadella. There’s not much to say about it, other than it is beautiful. It had way more people innit than the one we visited the day before, innit? We found a woolly mammoth (sigg3 for scale) and stared intensely at the ducks.

We ended up outside the Zoo, and decided to check it out. Despite all the WWF information plaques the park sympathetically has put up, I found the animal enclosures too small for comfort. But it was nice to finally see the white rhino, dolphins, and a silverback gorilla up close. And this guy eating carrots: 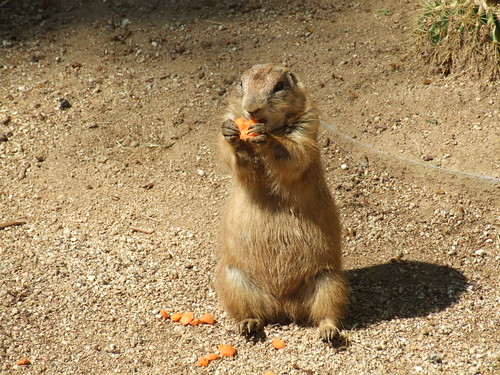 Before we exited the Zoo we also got to see the lions having a quickie in front of a class of school children, which is always amusing. We took a lot of pictures and video of it, but that is reserved for our private collection… NOT!

We had the menu del dia in a small family-owned café near the Marina metro station. Later that evening, we took a cab to Palau de Musica and had dinner at Cafe de l’Academia. If I’m not mistaken, we were seated next to a couple of Americans (who can’t stop talking). We called it a night after beers at a vegetarian place on Place de Georg Orwell. Here’s some random advice. This is not as refreshing as you think it will be:

Wednesday: The big day of Sagrada Familia — The Spaceship Cathedral. We bought tickets online the day before (always do this!) and skipped ahead of the queue stretched around the block in sweltering heat. 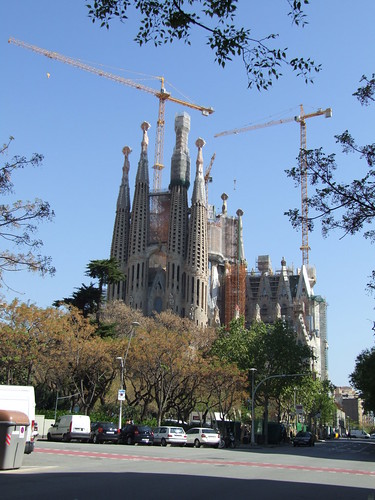 What can I say about this cathedral? The entrance is brilliantly detailed with many weird additions, but it still appears to be a church. However, upon entering the cathedral, we were struck by the feeling of having walked inside a 1990s alien space craft. The brilliance of Gaudí is unchallenged! But does this look more like being under the canopy of a forest than it does being inside the hull of a spaceship? 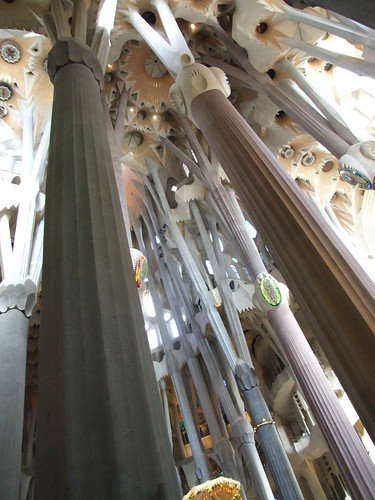 I think that upon its completion, when you can have some 3000 people in the choir(s), it will actually function as a church. At the moment, though, it was more of a tourist trap. Don’t get me wrong, I’m impressed, but I’ll take Aya Sophia in Istanbul any day over this, if I had to pick one. Which is a weird situation. Why would I have to pick one, when we have both?! Leave it, just leave it.

Having seen the cathedral, we were hungry and hungry for another park adventure! So we decided to bring along our baguettes, cheese and ham to Park Guell. That picture is a little misleading, because we never actually entered the part of the park which requires a fee. Just walking further up the hill gives you a nice vantage point to look down into it and outwards to the city. Having climbed up the hill for a while, we found a nice spot in the shade to have our picnic. The hill has a brilliant view of the city, and like so many times before the skyline of Barcelona made me think I was in some steampunk retro-future. Have a look at these giant mechas walking in the distance.. It’s incredible! 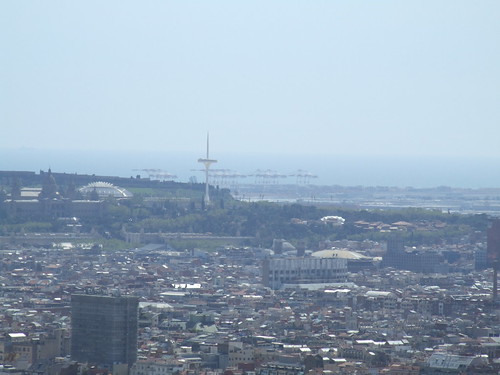 We stopped by the Casa Museu Gaudí and was inspired by his organic furniture, nice little villa and beautiful garden.

That evening we had tapas somewhere in Gotico followed by beer at Café Babel by the Roman Wall. We returned to these outside local places each evening, even just for a bear and to take in l’ambience.

Thursday: We gathered lunch supplies and took the metro and what’sitsname up to the castle of Montjuïc, where I caught another futurist view of this beautiful city. We took the what’sitsname with a couple of American tourist who I suspect had recently received fat-reduction and wore very big clothing. They were also annoyed that we joined them in this public transportation. But the reason I’m talking about it now, is only because I would be seeing them everywhere we went for the reminder of the day. Totally weird.

Anyway, we left the castle (tourist trap) to find our way to the beautiful Montjuïc Botanical Garden.. or Gardens, really, since the entire area was spread out over several hills and paths. We had lunch by the side of these beautiful water plants, and stayed put until I discovered a big rat with a look of lust in its eyes, peeping at us from beneath nearby the bushes. Speaking of bushes, here’s a rather futurist tree, come to think of it.

We headed to the Miro gallery, and came across these three rugrats up to something, on the way there: 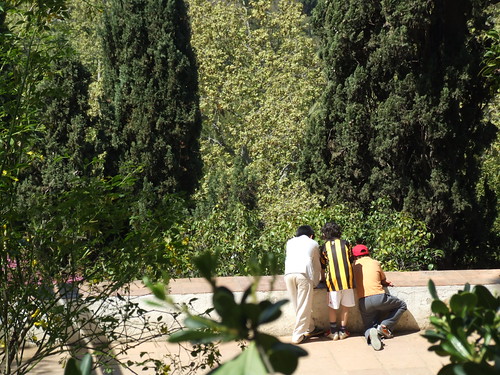 The gallery was AWESOME, and that’s all I’m going to say about it, because I’m getting really hungry thinking about all the delicious food we had.. Skipping ahead (you can always find more info in the photo gallery), we had coffee and ice cream at the Two Cats just below the Miro gallery, walked down to the National Museum, and stumbled upon the Van Rohe building — which should be very familiar to any fan of Grand Designs. And Lady C took this not-awesome photo of yours truly in Tourist Disguise: 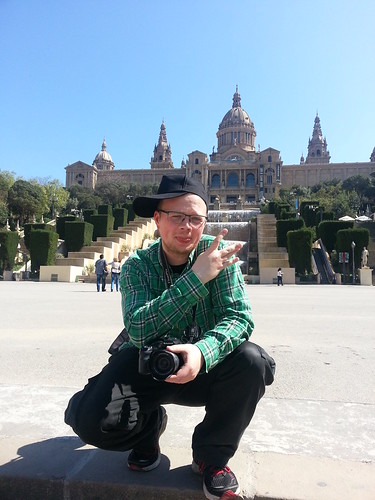 Thank you, I’ve lost a lot of weight.. at least until we found this butcher shop. We had a HUGE dinner on Plate de Tapas (contrary to popular belief, price did reflect quantity) and a regular late night beer at Fly Can, which is also next to the Roman Wall.

Friday: Our day of departure went really quickly. We had breakfast at our local café, stopped by the butcher to buy some presents (cheese and ham), and the bakery for some sandwiches (the girls working there were so sweet), and narrowly caught our airport bus at Place de Catalunia. The 50 minute ride out of the city was filled by one American girl’s need to announce her present status quo to all the passengers at regular intervals (“yeah, totally, right?”), and when we finally found our check-in counter, some 200 people were already in line. Needless to say, we’re all for automatic, electronic check-ins!

All in all this trip was absolutely brilliant, and we both fell in love with this characteristic Mediterranean city. We are positive we’ll return one day and see some of the stuff we postponed for later visits, not to mention some of the parks we missed! Be sure to check out the photo gallery, and have a good one!