This year’s April girl was nominated by kekePower. April is a special month for me, so it was no doubt when Jolene Blalock was nominated, because she’s a special girl. She plays T’Pol in the Star Trek Enterprise series. Special, all right. Sexy. Which is probably why she was featured in AskMen.com‘s Monday-femmes getting an overall rating at 80/100; "There are few things in life that we can be sure of. Death and taxes are certainly two things we can expect — now we can add another one. Begin a new Star Trek series, add an incredible hottie, and you will get a star on your hands that will be the fantasy of Trekkers everywhere." (Read more) 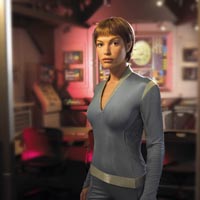 Most famous quotation: «I think my parents were high when they named me.»

What kind of man does she prefer? «I like men who are very cool but also so brilliant that they are almost insane. Sean Penn, Gary Oldman, Tom Waits-men who would be flipping burgers if they hadn’t found an outlet for their brilliant mind-sets. I also like men who have hands with big masculine veins that you can squish and move.»

Congratulations! Now, check out the other girls, or suggest your favourite!!