Tom Waits’ latest item to worship, is his 3 CD box set called Orphans, a name derived from the fact that these songs didn’t belong to any home (album). It’s too early to say whether this is something only for the hardcore fan like myself, but with 16+20+18 = 54 songs (over 30 "new" ones) it shouldn’t pose a problem to find new favourites! 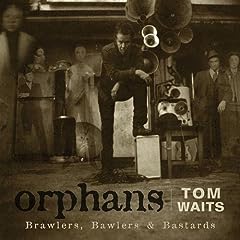 The three discs are divided by genre: Brawlers is chock full of raucous blues and full-throated juke-joint stomps, Bawlers contains a selection of Celtic and country ballads, waltzes, lullabies, piano, and classic lyrical Waits’ songs, while Bastards is filled with experimental music, stories and jokes.

The set is distributed by the ANTI record label, responsible for releases such as Alice and Real Gone.
Visit the ANTI site for tracklist and introduction by Waits himself:

When I was small I always thought that songwriters sat alone at upright pianos in cramped smoky little rooms with a bottle and an ashtray and everything came in the window blew through them and came out of the piano as a songand in a weird way that is exactly what happens.

What’s Orphans? I don’t know. Orphans is a dead end kid driving a coffin with big tires across the Ohio River wearing welding goggles and a wife beater with a lit firecracker in his ear.

Kathleen and I wanted the record to be like emptying our pockets on the table after an evening of gambling, burglary, and cow tipping. We enjoy strange couplings, that’s how we got together. We wanted Orphans to be like a shortwave radio show where the past is sequenced with the future, consisting of things you find on the ground, in this world and no world, or maybe the next world. Whatever you imagine that to be.

With Nietzsche’s Antichrist and Tom Waits’ Orphans, this makes for a promising x-mas!